The stuff the future is made of. "Thanks to TopSolid'Cam we can represent virtually the growing complexity and functional diversity of today's production machinery, and obtain well-conceived, trouble-free post-processors for smooth-running program sequences on our machine tools." Karl-Heinz Kragl, Head of Production, Lindauer Dornier GmbH 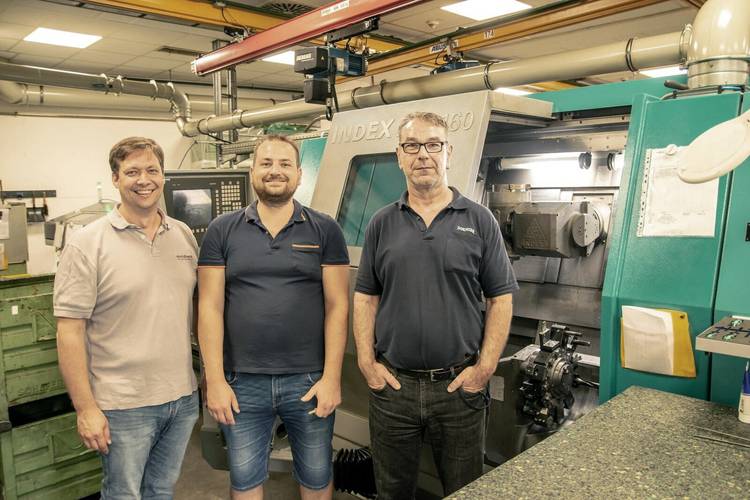 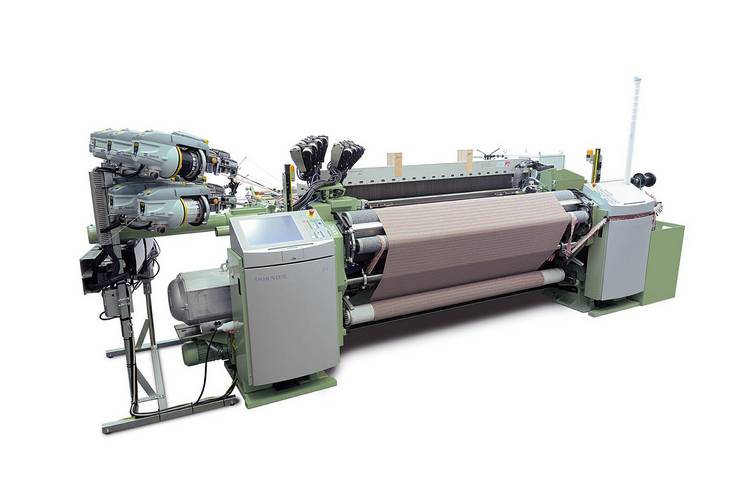 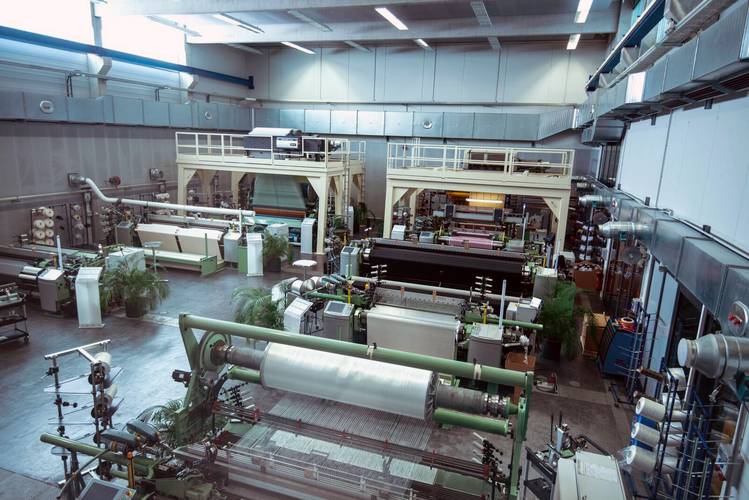 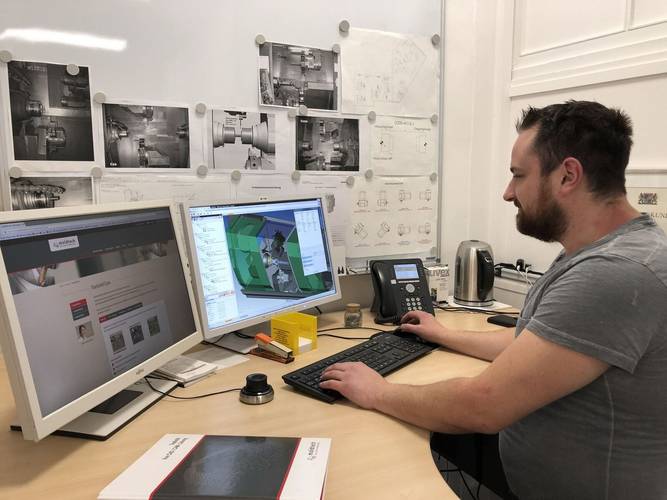 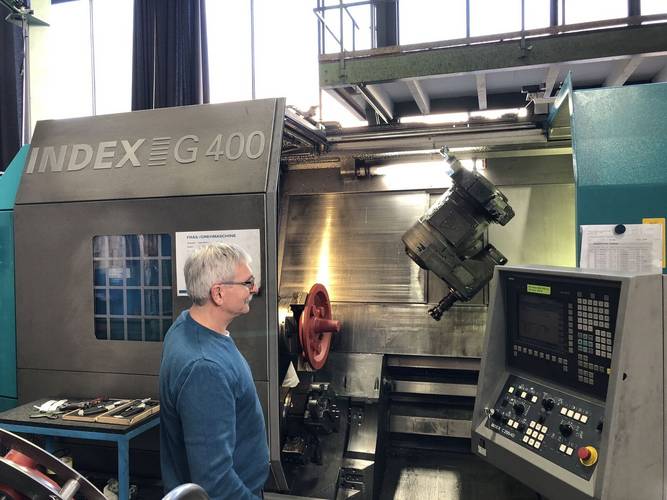 To this day the Dornier name is associated with the spirit of invention and reliability. Such a constant history of success can only, however, be achieved by dint of high adaptability and the courage to make changes. With Moldtech as partner and supported by its powerful 3D software solution, TopSolid'Cam, the weaving machine manufacturer from the Bodensee has opened up new lines of business, which should ensure its continuing success into the future.

In 1950, Lindauer DORNIER GmbH was founded on the site of today's head office in Lindau-Rickenbach. The previously world-renowned aircraft manufacturer, Dornier, began constructing weaving machines after the end of World War II, forced into this on account of aircraft manufacturing being prohibited in post-war Germany by the Allies. Today, Germany's only manufacturer of textile weaving machines also develops and produces film stretching machines for the thinnest of plastic films, as used in semiconductors, capacitors for hybrid vehicles and film displays for mobile phones, as well as for highly demanding fabrics such as airbags and aramid fabrics for fireproofing or ballistic applications. In the two factories, in Lindau and Esseratsweiler, the machines are manufactured with a staff of around 1000, 90% for export. With subsidiaries in the USA, China, India and Turkey, "LiDO" is also internationally represented.

With the purchase of several INDEX turning-milling centers a 3D CAM system was required in order to make the newly created business division productive as quickly and seamlessly as possible, and to tie it in optimally with the existing machine pool. The Moldtech system vendor proved to be a competent partner which, with its TopSolid'Cam, was able to demonstrate a highly efficient programming system for implementation, training and ongoing support.

TopSolid'Cam demonstrates its credentials through:

After wood and stone working, weaving is one of humanity's oldest trades, with proofs of the activity stretching back 32,000 years. Woven remains of garments, for example, have been found in the burial chambers of Ancient Egypt. Today, of course, it is no longer a matter of sending a shuttle back and forth on a clattering wooden weaving loom. On highly technological weaving machines, wool, silk and linen are woven into high-value materials for clothing, furnishings and drapes. And that isn't all: "Woven materials are to be found in more products than you might imagine," says Karl-Heinz Kragl, NC programming team leader at Lindauer DORNIER GmbH. Take airbags or tires: in the millions of cars driving along our roads, and also in aircraft, tire cord is used for strengthening the rubber profile. Airbags, made of an extremely dense material which needs to inflate in seconds in the event of an accident, are also woven, predominantly on the machines of Lindauer DORNIER GmbH.

These so-called "technical" textiles account, moreover, for more than half the company's business. For this reason, for many the name DORNIER still today is associated with the development and construction of aircraft, just as it was until the end of the Second World War. Before then, the factory in Lindau served as a supplier company in which, among other things, tail unit parts were manufactured. After the war, however, the Allied occupation forces prohibited aircraft manufacturing in Germany, and so DORNIER had to look around for a new field of activity. A nearby textile factory needed weaving looms and spare parts, following the inactivity of the weaving looms during the war. The high demands provided the momentum. Through innovation DORNIER once again, as previously in aircraft construction, achieved world-renown in this field too, from a standing start.

First to be produced were shuttle weaving machines, with their shuttles that shoot back and forth, and drying plants for the cardboard, paper and gypsum plasterboard industry. In 1967, the introduction of the rapier loom provided the platform for renewed success, and since then the Lindau-based DORNIER company has established itself as the largest German and an internationally renowned weaving machine manufacturer.

The stuff the future is made of

With its "Composite Systems" division, founded in 2015, the company is nowadays focusing on the development of special machines for the manufacturing of fiber-reinforced composites. This is a field in which the company sees a big future market. The 3D weaving machines bind together various carbon and glass fiber-based materials, with extremely versatile application possibilities, such as in turbine blades for jet aircraft.

For this new line of business, a new production hall was brought specifically into service. From planning through component manufacturing to assembly, the textile weaving machines have always been entirely constructed in-house at LiDO, and nothing is going to change in that respect with the ultra-modern composites industry machines.

So that the renowned weaving machines can function seamlessly, quality is the focus of attention right from the production of the individual machine parts. For this, the latest turning-milling centers have been installed in the new production hall. They offer flexible usability and make it possible to fully machine a wide variety of workpieces, practically right off the drawing board.

The geometrically demanding and highly precise workpieces must, furthermore, possess high surface quality. The spatial constraints, many axes and even more interfering contours in the machine room of the INDEX machines require therefore not only the decades-long know-how of the employees but also a modern CAM system, enabling programming by the user in a virtual machine. "From the start it was clear to us that you can only program such complex machining with a 3D model," Mr Kragl relates.

The excellent machine simulation in TopSolid'Cam was also a decisive factor in the systems vendor, Moldtech, being awarded the contract for linking up the new machine pool.  To this end, Moldtech first generated in TopSolid'Cam the 3D models of the INDEX machine models, including the related kinematics. In TopSolid'Cam users therefore program their workpiece already in the virtual clamping situation, and can match up all components optimally with each other on the PC. This also includes representation of the available tools. Users can - and should - expand and manage the system-specific tools library based around their actual tools, including the cutting parameters. TopSolid'Cam then calculates, based on the stored cutting parameters, feed rates and time values for tool changing, the duration of the processes, and also graphically displays the process sequence. Collisions can be eliminated at an early stage and optimum tool paths can be determined, also thanks to the automatic raw parts management in TopSolid'Cam. All machine paths are generated in constant comparison between two geometric models: the raw part and the finished part. The raw part is updated after every machining run so that work always continues in line with the current geometry.

"If we continue to work so well together, we shall achieve our goal of attaining practically 100% trouble-free operation of our NC programs," declares Mr Kragl. Only when importing 3D models from design are minor adaptations required at LiDO, and these can in any case be rapidly implemented via the integrated modeling function for imported CAD data. Thanks to the surface function in TopSolid'Cam the data can be easily imported, modified as required in line with production, and even scaled to mid-tolerance.

Pulling all the strings with reliable post-processors

The program follows the post-processor sequence according to the simulation and any optimizations made. TopSolid'Cam already possesses as standard excellent post-processors, which are developed in close collaboration with the machine manufacturers. Moldtech has linked up all multi-tasking machines in the new production hall to TopSolid'Cam via high-performance post-processors. These are provided with a NC code from the CAM application. "You'll never hear Moldtech saying no can do," Mr Kragl declares: "All post-processors were up and running in no time, for us to be able to program with them. If any machining cannot be satisfactorily supported, we receive within one day an updated post-processor." This also fills the Lindau company with confidence for the latest project to be undertaken with Moldtech and TopSolid'Cam: a post-processor for a sliding headstock with 3 channels and 10 axes.

To accompany implementation, Moldtech has produced for LiDO a progressively constructed training concept that has been adapted to the needs of the weaving machine manufacturer. With this, the employees have not only learned the basics of how to work with TopSolid'Cam but have also received special training on the topics of CAD, CAM and turning and milling tools. And if ever a LiDO employee gets stuck on an aspect of their work preparation, the software partner can always be reached by email, phone and remote maintenance. When it comes to support, LiDO has also found the right partner. Through adaptation to technological developments and ever-increasing demands in the manufacturing of components the machine pool of any company must undergo changes over time. Yet this holds no fears for such an innovative company as Lindauer DORNIER GmbH. "Thanks to the switch to the innovative TopSolid'Cam 7 we are confident that we shall be able to address any future demands that come our way," says Mr Kragl.