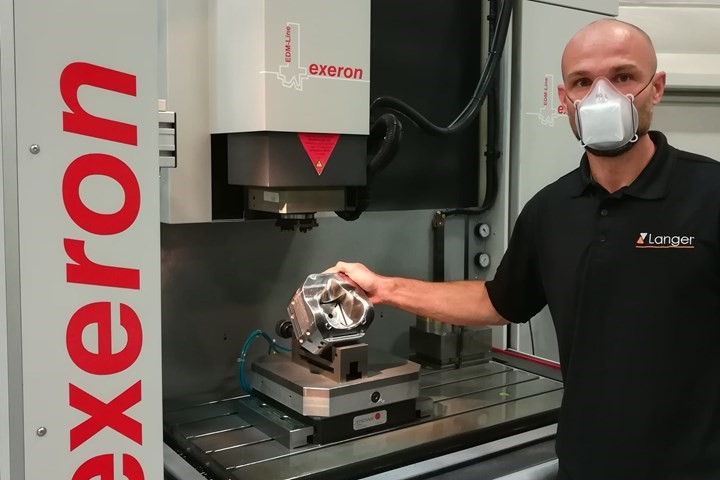 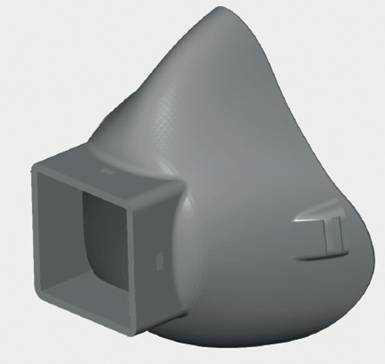 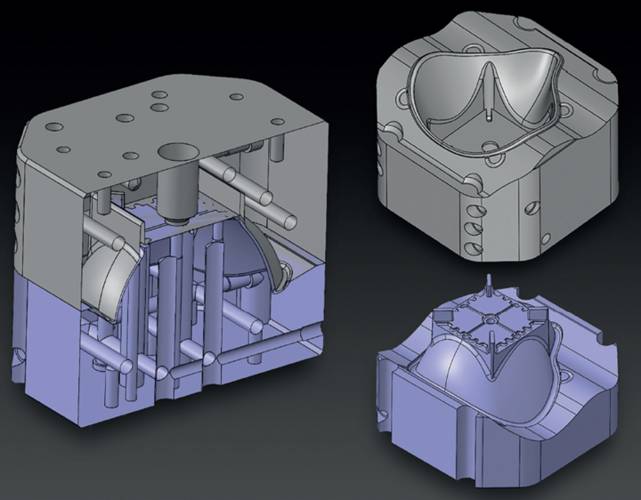 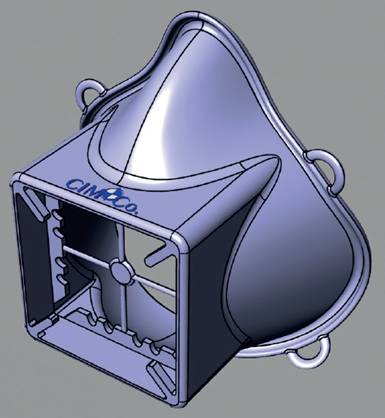 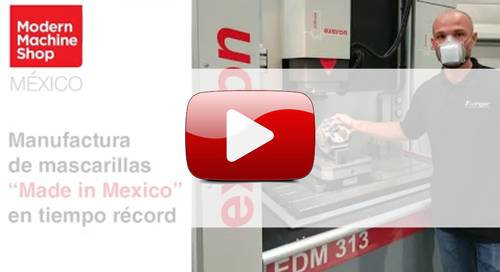 Langer México, a company located in San Miguel de Allende, has developed a reusable mask employing interchangeable filters, in collaboration with CIMCo, Dekosys and RA-Filters. The idea for the project came about on the last day of March, when COVID-19 quarantine restrictions were approaching Mexico.
“I had seen what was happening in China and Europe and what was going to happen in the United States and there are two things we needed at that time: protection against contagion and help for infected patients who needed ventilators", explains Robert Kühn, technical director at Langer Mexico.

That very same night, when the idea came to him, Robert analysed two companies which could help him make the project a reality. One of them is Dekosys, which carried out plastic injection and which is right next door to Langer, in the San Miguel Industrial Hub. The other company is CIMCo, the TopSolid representative. Robert has enjoyed a lengthy professional relationship with its owner and director, Hans Schwerdt.

“The two companies reacted quickly and positively and told me that they would be happy to join the project” explains Robert Kühn.

On 1 April, Robert shared his idea of the project with them and they began to analyse a number of basic models, the overall idea for the mask and how it would work. On 1 April, CIMCo began to convert their ideas into something tangible, which was 3D printed to produce samples with material that was not yet flexible. As the first 3D sample was hard and rigid, they used foam for some of the tests. Following these initial tests, they made some changes. With a CIMCo team working from home, round the clock, in constant communication with Robert Kühn for two whole days. “We communicated and discussed matters via social media, by telephone and by mail, until we had a final design on 3 April”, Robert explains. The next day, they finished developing the complete mold and during the night of 4 April, the mold was ready for the start-up of mask production on 5 April. 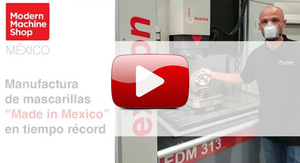 For the design phase, they used the TopSolid software, with which they had been working for 2 years: “The advantages are enormous: in programming, documentation and execution, this brings down production times by 80% when compared with the software we were using beforehand. This was crucial for the project and I knew that the people at CIMCo could provide us with exceptional support in developing the part”, Robert explains.

The stages in the design of the mask

After being contacted by Langer Mexico to come up with an idea for an effective, reusable and reliable mask for the population at risk, it was up to CIMCo to provide technical and inclusive support for the development of this project.

“The first phase consisted of a series of proposals for the 3D design of a model prototype. There were several options, each with their respective advantages and drawbacks, from the conventional knee-shaped masks, to more sophisticated designs offering improved support and a better seal around the cheekbones and chin, or with assembled parts”, explains Muganes Musharrafie, Director of sales and marketing at CIMCo.

Some of the initial proposals for the mask.

Once the discussion about the various design options was over, the choice was one of the very simple models, but which could be redesigned to adapt it to the new need and to specific conditions of use. The new design consisted of an interchangeable filter mask with the filter being secured by a four-point attachment system. 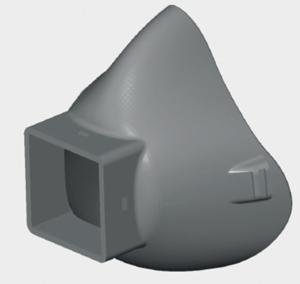 “In the same way, other mold cavities were added, along with a new surface for contact with the user’s face and four rings for attaching a strap for the wearer’s head instead of the original system, which involved placing slides in the mold”, explains Muganes. The starting point was the STL format model shown in image 2.

Once the changes, the new dimensions and the attachment had been agreed on, a first CAD model was produced to bring the design to life. The platform used was TopSolid’Design and TopSolid’Mold, an ideal 3D modeller for designing irregular surfaces and shapes, along with the development of complex cavities and non-linear deformations.

In the first part, CIMCo supplied Robert Kühn with the 3D model, the core and the central cavity of the mask.

First CAD model and upper and lower halves of the mold.

“Once the CAD design of the mold was completed, the decision was taken to make a final change, by modifying the thickness of the mask wall from 2 mm to 1 mm. Finally, the seal of the models was checked in TopSolid’Design to ensure that the 3D model could be imported with all its solid characteristics onto any CAD/CAM platform” Muganes explains.

The design process did not stop there, because with the CAD model sent to Langer Mexico, they continued to work with TopSolid’Mold to obtain cooling circuits and with TopSolid they were able to automatically identify any interferences between the elements and the accessories. The result of all the changes, considerations and adjustments, led to the mold shown in image 4. Later on – with the help of TopSolid’Cam and developed machining models – Langer carried out machining with no need for supervision on the Exeron CNC machines. 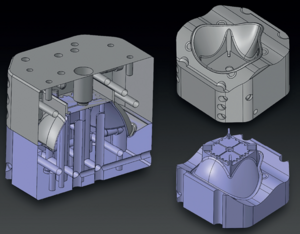 "TopSolid offers a competitive advantage because it is a CAD/CAM software written over a PDM. This means that everything we design with the software is linked in a database. Consequently, when designing a TopSolid mold or any other part, all the elements, processes and know-how of the company are automatically linked and any modification whatsoever will affect all the phases: design, cavities, water circuits, heat sink, injection simulation, mold-holder, machining, standard components library, bill of materials, and even electronic documentation for the workshop”, explains Muganes. 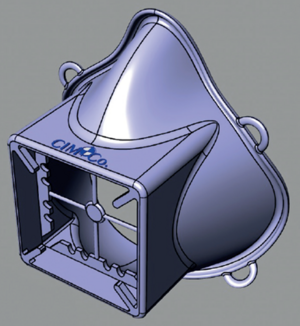 TopSolid is a product that handles the design and manufacture of all types of components, but for molds, it has all the necessary tools, such as design with version management and design authorisations, design in “remote” and “collaborative” modes involving several people, generation of the core and the cavity, production of runoff surfaces, extraction of electrodes, plastic injection analysis, mold kinematics, revision and traceability of modifications, generation of milling, turning and electro-erosion machining operations, BOM and documentation.

CIMCo provides information on the basis of Robert Kühn’s requirements, creating the mold around the part in a single day. Fortunately, the tools and materials needed to make the mold were available in the Langer workshop, which helped speed up the manufacturing process.

They began to manufacture the mold with the mask blank on a Trimill VC 1810 machine, which has travel of 18000 mm x 1000 mm and a table capacity of up to 10 tonnes. “This is one of the company’s smallest machines, but it is extremely precise. The spindle rotates at up to 12,000 rpm and is suitable for roughing and finishing operations”, explains Robert. 80% of the entire mold is made on this machine, along with 80% of the surface finishing, thanks to the properties of the Trimill, a machine specialising in roughing and finishing with a single setup. Selection of the processes always depends on the shape to be given to the steel. In the case of the mask, many zones require tools smaller than 0.8 mm with strict requirements. Therefore, for working at different locations on the mold, high rotation speeds were used to carry out the process. "Obviously, this type of tool is not very long, so the tool has to be brought very close to the formed part, which is not possible in only 3-axis, so 5-axis machining had to be used” explains Kühn. Most of the external and internal parts of the mask mold were machined in this way.

This was the case for the mold cooling circuits, where a 5-axis Exeron HSC 600 machining centre had to be used with a tool speed of 42,000 rpm. “On this machine, machining was extremely quick and easy. We usually take longer to prepare the parts on the machine than the actual machining itself, but fortunately we have automated erosion and milling processes” explains Robert. For all the processes in the workshop machines, Langer uses zero point clamping systems from Erowa, as well as magnetic plates which make preparation extremely rapid. “Generally, the machining process is quicker than the installation of the parts” explains Robert Kühn.

They then carried out 5-axis finishing on the complex surfaces and, later on, the mold cavities were machined using die-sinking electrical discharge machining on an Exeron machine. “These EDMs are the fastest machines on the world market and, thanks to this technology, we were able to carry out EDM machining of the cavities in an exceptionally short period of time. These machines have the latest generation of programming and generators, which meant that we were able to carry out EDM machining twice as fast as any other brand worldwide. This technology was launched in early 2020 and can reach a VDI 2 speed with copper and VDI 7 with graphite in record time”, explains Robert Kühn.

Injection was carried out by the Dekosys company, 10 metres away from the Langer facilities. This company usually makes electronic parts for the automotive sector and has considerable production capacity with the very latest in injection machines. The mask as a finished product exits the assembly and packaging halls, where there is a positive pressure surface environment. The cleanness in these halls is similar to that of hospitals. They are currently producing 5,800 masks per day, thanks to the internal design of the mold and its cooling system. The complete injection cycle takes less than 15 seconds.

This mask was built with the aim of helping. “What we are trying to do now, is to sell as many as possible to those who really need it, targeting large companies which need or will soon need to provide their employees with protection and safety, because this situation will be with us not just for a few weeks, but for several months”, explains Robert Kühn.

“This project is the result of a union between Langer México and CIM Concept, two engaged and responsible companies working with the Mexican people in this situation which affects everyone. The project is also a symbol of the technical effort and resources committed on both sides, as well as the proven effectiveness of using existing designs and mold elements. We hope that this product will be of use and will help mitigate the shortage of masks on the market” concludes Muganes Musharrafie.

You may read the original article here