Even chain store managers appreciate customised fittings for their projects, which means more CAM programming and design work for the shop fitters. The company Waidele Shop floor design GbmH therefore invested in TopSolid'Wood from Missler Software, in order to give a quick and flexible answer to clients demands. The 3D application not only reduces delivery times, but it also saves money when purchasing supplier parts. 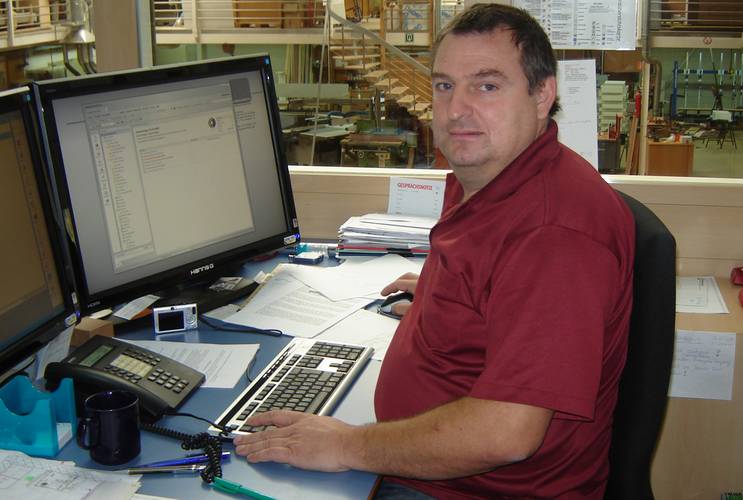 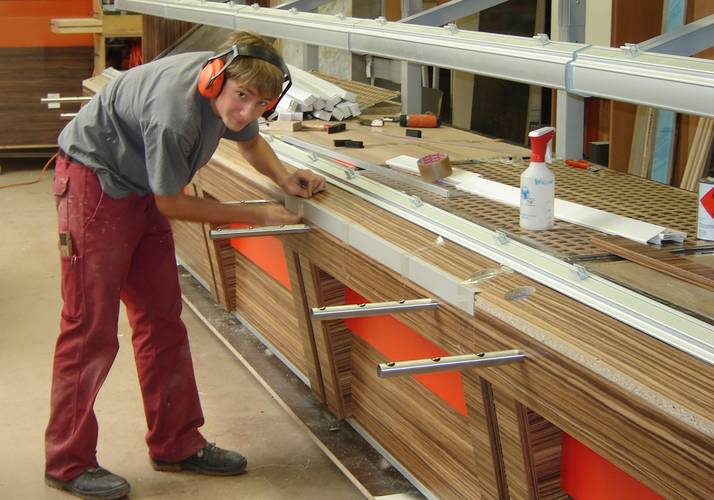 The company Waidele GmbH &Co KG's main office is located in the heart of the German Black Forest, in Rippoldsau-Schapbach. Originally created in 1920 as a carpentry business, it is however specialised in shop floor design since 1991. With 32 employees, the company is certainly not among the major players of the industry, even though its business is growing internationallly: about one third of its sales are exported. In fact, the company Waidele GmbH delivers 40 to 50 drugstore designs to France and provides French major supermarket chains Leclerc or Supermarché U with refrigerated counters for baked goods. The company has also designed facilities for mobile communication providers in Germany and the large bakers Sternenbäck and Sehne (with 100 to 200 subsidiaries) are also clients of Waidele on the German market.

The company positions itself as system supplier of shop floor designs for the fresh goods industry, as a differentiation strategy from its competitors. The company develops full counters including cooling, electricity, lighting, glazing, stone requirements as well as metal parts and coordinates the manufacturing of suppliers components. The counters and components are then assembled and tested in the machining hall in Schapbach, before the ready to install counters and the assembled designs are delivered to the client.

Swiftness and flexibility are the two key ingredients for success on international markets, says Roland Waidele, who manages the fate of this medium-size company, together with his brothers Lothar and Herbert. "Planning departments nowadays make bids all over Europe and often give contracts to foreign companies due to cost constraints. However, when time is an issue, they always come back to us because they know we can delivery within 15 days. Thanks to our modern equipment and our flat structure, we are able to meet client demands in a very flexible and short-term way."

The challenge for the shop designer is that clients require solutions with growing customisation. The construction of shop counters varies from one subsidiary or from one client to the other and also based on criteria such as with or without selfservice etc. "Before, we had two or three types of counters and we would always deliver standard counters. We've made up to 15 special types of counters within this year so far, says Roland Waidele. That's why we have to create more drawings and do more programming.

What Roland Waidele means by drawings is actually 3D models, as the company has been using a 3D-CAD system integrated in an industry specific OSD software for a long time. But the software was rather inconvenient and had no CAM connection, so that when preparing the work, employees had to redo NC programs when additional changes in the counter geometry occured. Additional, last-minute changes being the daily basis in the industry, as states Roland Waidele:" with the order confirmation comes a plan, which requires changes the next day already."

The shop floor designers therefore needed a new, easy to use 3D system that would meet the following criteria: flawless and quick design, easy reuse of available designs, and optimal support of a CAD/CAM process. Thanks to a happy coincidence, an adapted solution was quickly found and after a short test, Waidele decided to go for TopSolid'Wood from Missler Software.

At the beginning of the year, Waidele installed 2 CAD and CAM licences on each efficient PC workstations, all equipped with 2.67 GHz Quadcore processors, 3 GB computer memory and GeForce graphic cards by NVIDIA.TopSolid'Wood is currently being used parallel to the older 3D applications, in order to go on and wrap up current projects to avoid recollecting all the data and training all staff all at once.

AdeQuate Solutions proved to be a competent partner in the implementation and installation process, having worked with several wood industry clients and therefore knowing the specific requirements of the sector.

The system supplier based in Lahr not only trained end-users with a reactive hotline support they can benefit from but also handled the connection to the two 4 axis operation centers by Homag. This work included on the one hand the post processor adaptation to the machine specifications and cycles; and on the other hand the representation of the 3D cinematics, in order to program and simulate reliably all the NC data treatment with TopSolid'Wood.

AdeQuate Solutions also programmed the connection to the industry system OSD, which the shop designers calculate their quotes, compile lists of parts, and make connections for the adaptation of panel saw with. Waidele wanted to have an integration as good as with the previous 3D-system, in order to deduce the list of parts from the 3D model and deliver this list automatically to OSD for the creation of parts listings."As we were explaining our needs to our AdeQuate Solutions point of contact, he was developing the interface at the same time, it was incredible!" says Waidele, who was deeply impressed by the competence of AdeQuate Solutions staff.

TopSolid'Wood is being  operated by two users in Schapbach, who not only design with the software, but also generate NC programs. Stefan Rauschenbach was trained as a carpenter and has familiarised himself with the software in 3 days. After 2 to3 months, he knew the software well enough to become productive with it. "Should more users work with modeling, we would have to further automatise our way of working. That's why we plan to do an additional training to go more in depth with parametrics, says Rauschenbach, who is very satisfied with the TopSolid'Wood functionalities." The only issue to optimise at the moment is the quality of the generated views, when directly printed from TopSolid'Wood, so that the graphics need to be converted into Bitmaps before printing.

The basis of a shop designer's work are the floor planer's visions and outlines, which are normally still constructed in 2D, and do not therefore always coincide with what can be now determined at a glance thank to 3D construction. The plans are then imported as DXF data into TopSolid'Wood and put in the background to grasp some radii, for tray slips, for example. The counters are then modeled starting from those 2D shapes. Roland Waidele thinks that TopSolid'Wood is easier to operate for any design projet than the 3D system they have been using until now, where one had to create each single part following precise specifications and position the part in each assembly group. "Before, we would not model certain parts such as fitting parts, because it took too much time. Now with TopSolid'Wood, it only takes a third of our time", say company's managers who regret that manufacturers of purchased parts do not work with 3D models, which could then be used in design.

In fact, 3D design makes reusing already created components easier.Eventhough counters design requires more and more customisation, certain single parts such as brackets for windows or supports with little changes on other projects can be reused. The main body of counters is usually also very similar. Waidele counts therefore on a reduction of design work with already existing parts in 3D: "we cannot model everything at once in 3D, because the workload would be excessive, this is a long term process over the years."

The shop designers save time not only in design but also when it comes to CAM programming, even though there is still a lot of room for time savings improvement.

Indeed, with TopSolid'Wood, one can build on design components such as drillings, or pockets to define consistent treatment cycles, which allow a wide automatisation of CAM programming. "We now only use proposals which make the CAM system for drilling treatment" says Rauschenbach and Waidele goes on: "the cycles for pocket treatment do not completely correspond to wood treatment needs, where one plunges slowly into the material from the pocket middle. There is room for improvement".

Up until now, Rauschenbach has mainly designed special counters with TopSolid'Wood - counters which are sometimes round or go over the corner where there is a big risk that fittings don't fit or windows do not open correctly. Such collusion issues are detected with 3D modeling a lot better than with a 2D sketch with cutaway views, as Waidele states: "we note that the error rate now is very close to zero and that different components go together perfectly; the stone with the layer, the glass window with the metal part. This beats the machining times down, which have certainly been reduced of ten percent. A important element is that all colleagues see on sketches the 3D representations next to the cutaway views when machining and assembling.

The subcontractors can also benefit from the 3D designs, as the shop floor designers now supply 3D data, which they can use to program machining without too much adaptation."We design the metal parts and give the data together with the sketches to the metal worker, who can work with these directly", says Waidele. "The machining of our parts is therefore a lot quicker, but it also costs a lot less money because our metal workers don't need that much time preparing the work."

Project deadlines are now a lot shorter thanks to TopSolid'Wood states Waidele: "we are now almost three times quicker because we order the machining of time critical subcontracted parts based on our sketches. Previously, we could only order collusion-critical parts like mitre glass windows of a circular counter after costly and precise sketching work. Now we can accept projects with shorter delivery deadlines, which makes us even more competitive."