Offering cutting-edge cutting technologies: this is the credo of Ifanger AG from Uster, near Zurich, a company founded in 1917 by the grandfather of the current company boss. Alongside special tools for turning and knurling, the Swiss family business manufactures high-precision internal turning tools out of ground carbide for bores of 0.5 to 7 mm diameter. These tools are marketed worldwide under the trademark MicroTurn, predominantly to customers in the electronics and medical engineering industries, as well as in automotive engineering. The company has also for many years marketed drill chucks, clamping jigs and milling, turning, drilling and countersinking tools for big name manufacturers such as Kennametal and Komet on the Swiss market. 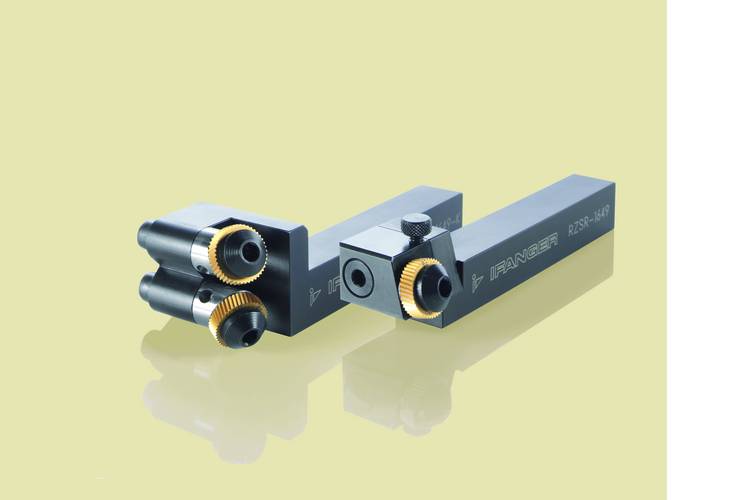 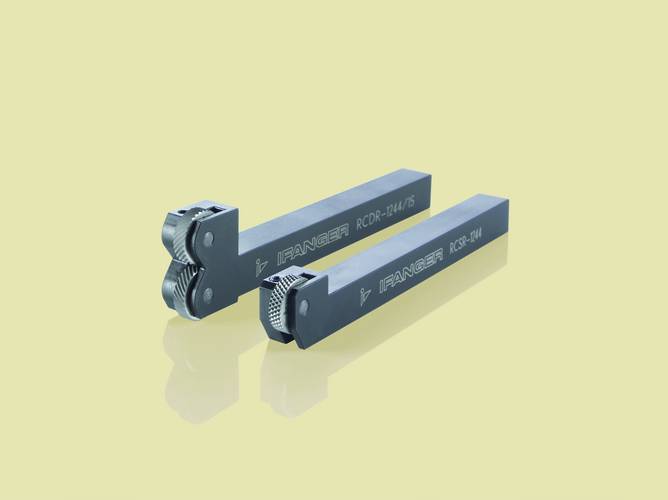 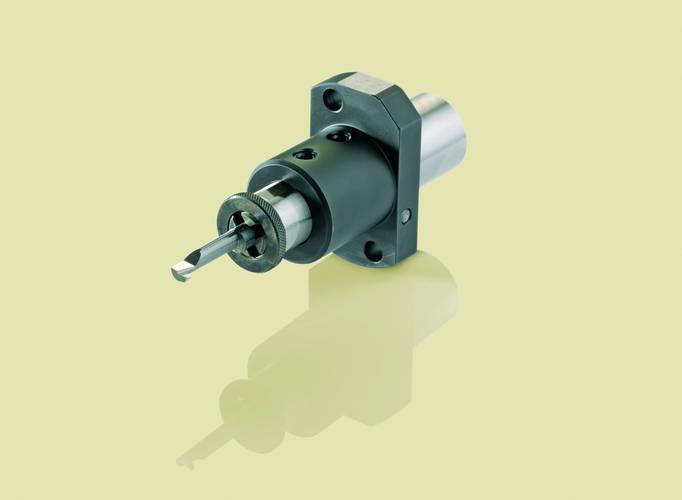 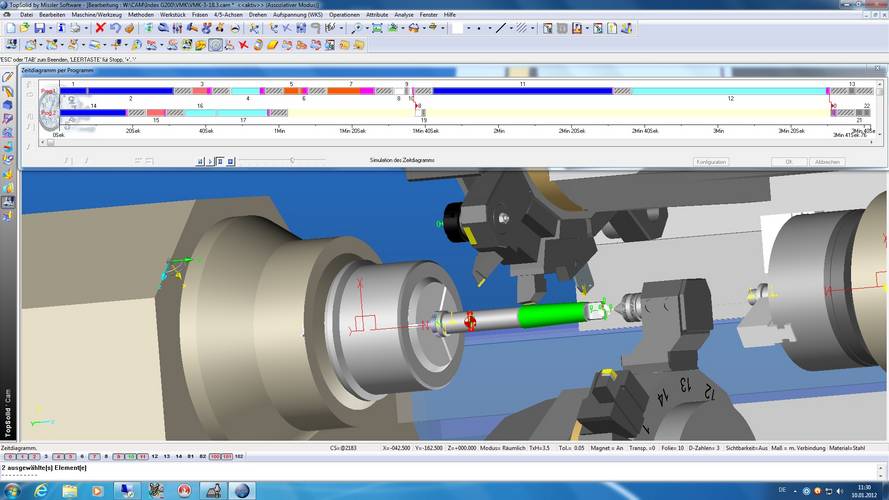 Internal turning tools with a constant profile, which had to be honed on the cutting edge only, were for a long time the stock-in-trade of the Swiss tool manufacturer. "Today, the MicroTurn family of internal turning tools made of carbide and ground from the solid rod constitutes our main product," says Ifanger managing director, Stephan Spuler. Although these are in principle standard products, the company has to develop special tool holders for every new Swiss-type lathe that comes on to the market, and there are quite a few of these. Larger turning tools with inserts or holders for knurling tools are also normally custom-made products that are developed and manufactured on commission from the customer.

In order to be able to process customer-specific jobs more quickly and more cost-effectively, Ifanger models special tools and tool holders in 3D with TopSolid, so that they can be adapted just by entering a few settings. This has enabled the cycle times to be dramatically reduced, as Spuler says: "In the same time that it used to take us to redesign the holder for a knurling tool in 2D, today we can adapt the model, generate the appropriate CAM program and mill the part on the machine. The integration of CAD and CAM offers enormous time savings, in particular for product ranges that are manufactured in small batch sizes."

Prompting the introduction of the 3D CAD/CAM solution from Missler Softwre a year ago was the procurement of a new Fehlmann P 60 precision milling machine, equipped with Heidenhaim 530 control. On the compact, low-vibration 5-axis machine they wanted to completely machine the customer- or machine-specific holders, and this required a new programming system. With the traditional software, the complex machining of work pieces with lots of interlinking sloping surfaces could no longer be programmed, or could only be programmed with disproportionate time investment for running-in and optimizing the NC code. "We wanted to proceed more quickly with small batch sizes, and the prerequisite for this is error-free programming," says Mr. Spuler, who took it upon himself to seek out the appropriate software. Another reason for the procurement of the new programming system was that the company also wished to offer young people an attractive workstation corresponding to their particular level of training.

As a manufacturer of its own tools and tool holders, Ifanger needed a CAM system with powerful CAD functions, which limited the range of systems that might fit the bill. Just as important for the company was good support for turning operations, since they wanted to associate not only the Fehlmann P60 but also the two Index G200 milling centres with the CAM solution. Both machines are equipped with double spindles and two tool turrets each, which are fitted out for the (frontal) milling and drilling of turned parts with driven tools. They have actually been in use for several years, but until recently they were programmed using a normal text editor, with the drawback that often operators would only discover collisions in the course of running-in. This would lead to long downtimes or machine breakdowns.

The appropriate software was rapidly pinpointed: of all the system solutions or system combinations under consideration, TopSolid offered the best CAD/CAM integration and the best support for the integrated turning and milling. The choice of partner proved harder than the decision of which system to opt for. Despite the physical distance and certain "language barriers" (compared to standard German, Swiss-German is a language unto itself!), the Swiss company opted for the German Missler Software sales partner, AdeQuate Solutions, since they brought to the table a great deal of experience in the field of rotary milling, and could call upon ample personnel resources. "This guaranteed us good user support and reactivity for any required adaptations to the post-processors," says Mr. Spuler, who is extremely satisfied with the support from the Lahr-based systems vendor.

In the first instance, AdeQuate Solutions linked up the Fehlmann P60 to TopSolid. The system vendor delivered the post-processor required for this together with a kinematically prepared machine model which enables simulation of 5-axis machining in the virtual machine environment. Only three or four minor adjustments were necessary on the post-processor for the application to run like clockwork, as Mr. Spuler says: "We modelled the clamping towers for the clamping of several components ourselves, in order to be able to simulate cross-part machining. For the milling tools, we get by with the standard features of TopSolid’Tool, so that we only need to add a few special milling cutters and the records to the library."

For the turning, by contrast, many tools were mapped one by one in TopSolid’Tool, while the records for the Index machines could be downloaded from the homepage of the manufacturer. The connection to the two milling centres was, in all, somewhat more costly, because Ifanger has special requirements with regard to the bracing of the work pieces, the free running of the turrets and the gripping of the parts by the counter spindle. The CAM programmers must today still enter these operations manually. "This, however, is not so much a problem with the post-processor, which correctly interprets the manually defined operations, as it is a matter of routines that are missing in the CAM software," says Richard Zak, Head of the drilling and milling department at Ifanger. "TopSolid provides the possibility of filing such operations as reusable methods, but we are still somewhat lacking in training in this regard."

With regard to training, AdeQuate Solutions provided three-day training for the operators in the use of the basic CAD and CAM functions. According to Mr. Spuler, who himself works with the system, this does not give much time to become familiar with the particularities of parametric design: "For example, I enter the tool holders as a parts family in order to be able to adapt them quickly to customer-specific requirements. If you have first of all correctly defined the parametric relationships, it goes incredibly quickly. Recently, I astounded one customer when I modified the 3D model while talking with him on the phone, and sent him a PDF of the updated drawing even before he had hung up!"

Thanks to the consistent configuration of parts, which frequently occur in similar form, there has been considerable reduction in design expenditure and in the development of parts families. A further advantage of the 3D approach is the possibility of generating photo-realistic views for product catalogues or customer documentation, based on the models, according to Mr. Spuler. This additional usage is, however, not currently fully exploited.

The designers also use TopSolid for modelling the MicroTurn tools in order then to generate from the models manufacturing drawings for the carbide grinding. To Mr. Spuler’s regret, the grinding machines cannot yet be associated with TopSolid’Cam for CAD-supported programming of the machining. One of the consequences of this is that the angle measurements of certain geometries in the drawings, which have been mathematically correctly entered, need to be reworked for manufacture. "It's no major problem," says Mr. Spuler, "we just have to make sure that we enter manually the measurements in the event of any changes."

TopSolid is currently running in Uster on two CAD workstations and one CAM workstation, shared by two programmers in the workshop. They do their programming in the direct vicinity of the machines so that they can monitor the running-in of new NC programs on the spot. "We have filed the machine configuration and clamping specifically with respect to the parts concerned, so that an available template with machining operations, cutting values, feed rates, etc., can simply be reused for similar parts. Thanks to reuse, the effort going into programming has been reduced from an initial two to three hours down to half an hour," Mr. Zak explains. He also looks forward to further time savings due to the more consistent use of standardized machining sequences, for example, for drilling, centring, faceting and tapping, which can be stored as features in the CAD model.

TopSolid’Cam not only accelerates the programming of mill-turn machining, but also reduces the time spent on running in new NC programs on the machines. This applies in particular for the mill-turn centres, for which the movements of two turrets need to be synchronised in a relatively tight workspace. "Good visual control of the entire machine space is one of the software's particular strengths," stresses Mr. Zak, who has already worked with various other CAM systems. This allows operators to detect and avoid collision problems as early as the programming phase, with the result that they can send more reliable NC programs to the machine.

With the aid of a graphic flow diagram they can also simulate the time sequence of the machining operations on spindle and counter spindle, in order to distribute them in such a way as to minimize the machine running time. "We did of course do this previously, too, but only when running in the programs, which meant that the machines would often stand idle for hours," says Mr. Spuler. "The use of TopSolid does not therefore necessarily contribute to the reduction of machine running times, but it certainly does contribute to improved machine availability, because today we need far less time for the troubleshooting and optimization of the machining programs." This saves costs, which is an important competitive factor for a company based in a country dealing in hard currency. Particularly inasmuch as our Swiss neighbours cannot bank on any strengthening of the euro any time in the near future.