The economic crisis has brought many an IT project to a juddering halt. This has not been the case at Koenig & Bauer. Despite a slump in orders, reduced hours and a number of job cuts, the renowned press manufacturer has succeeded in implementing the planned switch to the TopSolid’Cam computer-aided manufacturing system practically on schedule. Thanks to TopSolid employees who are involved in NC programming now perform all the more efficiently, so that they are on the best possible footing for the next flood of orders. 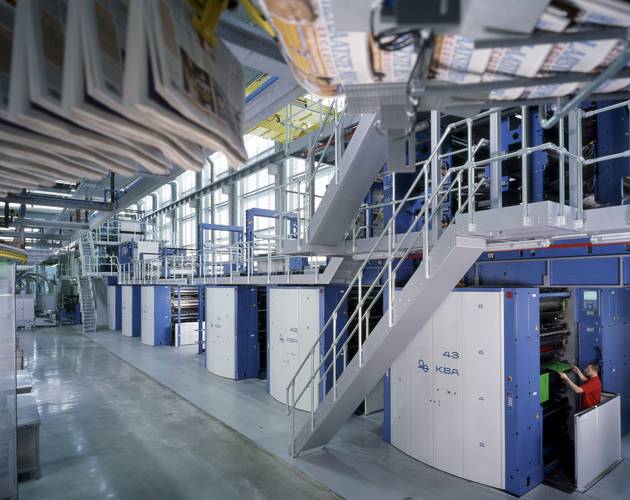 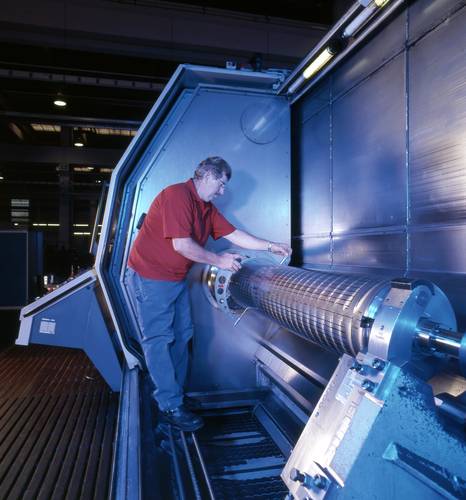 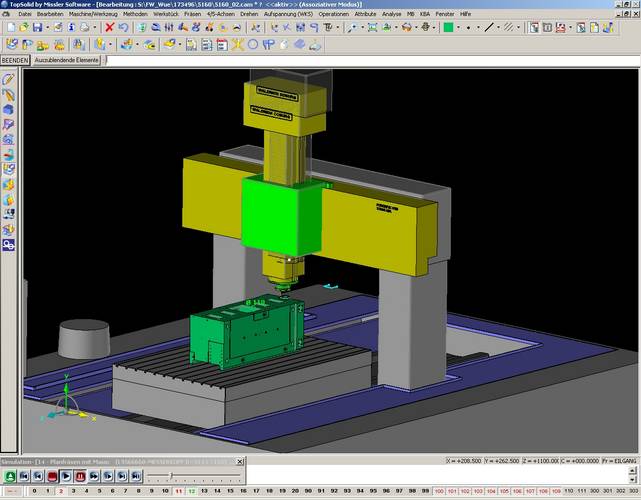 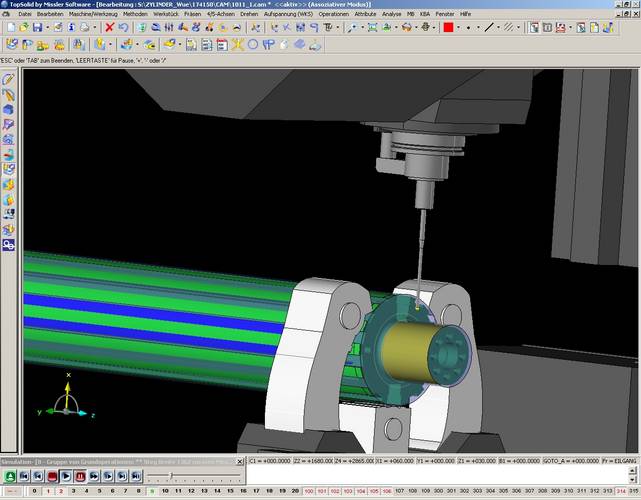 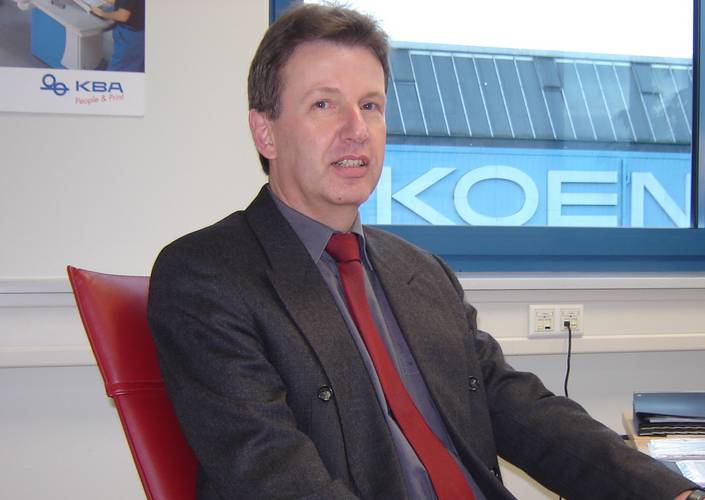 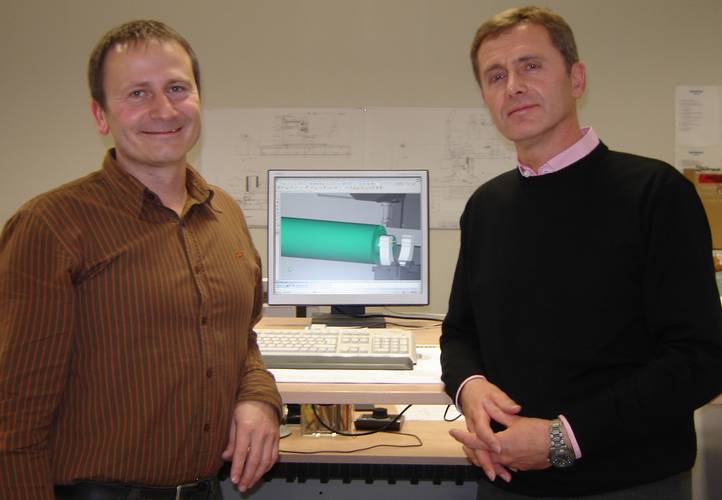 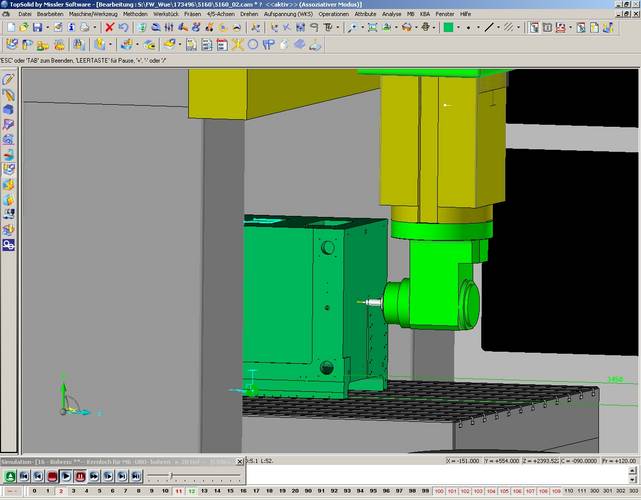 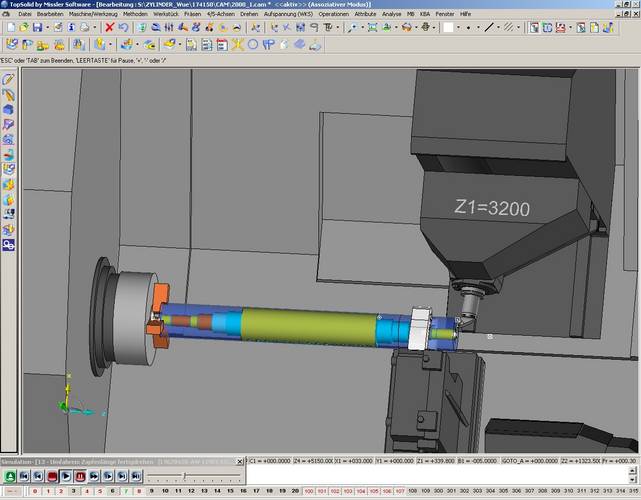 Koenig & Bauer had a hard time of it in 2009. In the first three quarters alone, the export-dependent press manufacturer had to absorb a slump in orders in excess of 30%. Thanks, however, to capacity adjustments and other cost-saving measures, they hope to be able to post balanced end of year results. Koenig & Bauer currently employs around 7000 throughout the group. The group's parent company is Koenig & Bauer AG (KBA), founded in 1817, with factories in Würzburg, Frankenthal, Radebeul and Trennfeld. Closely affiliated to the Group is the KBA-Mödling AG machine factory in Austria, which manufactures its own machines for printing bank notes and components for sheetfed presses, and a number of other subsidiaries at home and abroad.

The KBA group is one of the largest press manufacturers in the world, and the number one manufacturer for large format sheetfed offset presses as well as for packaging, newspaper and tin printing presses. The company's extensive product range that spans the gamut from newspaper and phone book printing through sheetfed offset and commercial web offset printing to digital printing has offered a degree of stability in the teeth of the economic downturn. Consequently, orders already started to pick up somewhat for sheetfed offset presses in summer 2009, despite no improvement yet being in sight for the customer-specific and more expensive printing systems for newspaper and commercial web offset presses. The large web presses are mainly manufactured in the Würzburg factory, which also has its own foundry.

Nonetheless, the workers at Würzburg have been fairly busy in recent months: "Our parts spectrum has become significantly larger and more diverse, since the crisis has forced us to resort to more insourcing, so that today we are manufacturing parts ourselves that we or the other sites would formerly have bought in. We now manufacture all the larger cast parts in-house," explains Dr. Andreas Göttker, Head of Manufacturing and Foundry for KBA in Würzburg. On the new portal machining centres, which came into operation at the end of 2008, large cast parts such as side frames and substructure boxes can be machined with high precision. In order to achieve maximum capacity utilisation, KBA also operates as a contract manufacturer.

Alongside their regular daily work, the NC programmers in Würzburg and their colleagues in Frankenthal, Radebeul and Mödling - some 50 users in all - needed to learn about the functions of the new programming system. In May 2006, KBA had decided to replace the old programming system (Bravo NCG) with TopSolid’Cam. What proved decisive in the choice of TopSolid as opposed to a CAM solution tied in with the NX design system included the fact that TopSolid offered better support for the multifunctional turning-drilling-milling centres of WFL Millturn Technologies, as used by KBA on all its sites, in particular for manufacturing cylinders. What also played an important part in the decision, moreover, was the bespoke support offered by the system manufacturer and its regional sales partners.

The implementation of the new CAM solution in Würzburg and Frankenthal was handled by the Missler Software partner, NCDATA AG. In order to be able to link up the machinery pool on both sites around 40 post-processors were programmed for KBA. They generated the 3D models of the machines in TopSolid’Cam on the basis of the corresponding manufacturer data or else, if no such data was available, they built them up from scratch and mapped the machine kinematics in the models, this being the pre-requisite for reliable programming and simulation of the tool paths. They also linked the TDM tools administration via an interface to the new CAM system, so that users would be able to access the existing tool parameters and the measurement values from the default settings when carrying out programming.

The TDM settings are used in two ways in TopSolid’Cam for generating the tools geometry, as Rainer Wiesner, NC programmer, explains: "On the one hand, we generate templates by means of which the tools are dynamically constructed, based on the settings. This works well with rotating drilling and milling tools which have a relatively simple structure. For turning tools, we still retain the settings in TDM, but generate a 3D model interactively in TopSolid, so that we have the correct geometry for the simulation. Or else, we receive the models directly from the tool manufacturers." The interface between TopSolid’Cam and TDM is bidirectional, which means that the CAM software reports back on the tools used to the tool administration system, as used by the programmers for populating and maintaining the tools lists.

An essential requirement of the new CAM solution was the possibility of importing, along with the CAD geometry, specific manufacturing information into TopSolid’Cam and using this information for the automation of the NC machining. This is particularly important for the manufacturing of the gigantic side frames, incorporating between 1000 and 2000 drill holes, most of which are repetitive. Missler Software has written a corresponding additional program for KBA which allows it to evaluate the drill hole lists from NX in TopSolid’Cam and to visualise information such as bore type, diameter, bore depth, machining type or tolerance directly on the basis of the underlying 3D model. Based on this information, the drill holes can then have automatically predefined machining methods assigned for them.

Whereas programmers previously had to simulate the CAD geometry in their CAM application in order to be able to generate their NC programs, now they can import the Parasolid data directly and associate it with the manufacturing information out of NX. TopSolid offers powerful CAD functions for preparing models that are ready for manufacturing; for example, it is possible to offset a drill hole by fractions of a millimetre to ensure that it is properly centred. "It is possible to make 'dumb' geometry that bit smarter, for example, by placing two surfaces in relation to one another and thereby modifying the resulting measurement," Mr. Wiesner points out.

Dr. Göttker is not yet entirely satisfied with the change process, in other words with the possibility of updating and/or adapting existing NC programs through design changes with the least effort. The designers often use existing components as a template for new projects, with only slight modifications being made. The difficulty resides in communicating these changes of geometry and data selectively to TopSolid’Cam. The system does, it is true, ship powerful functions for geometry comparisons, so that you can identify, for example, which drill holes have been moved. Yet the user cannot integrate the changes at the touch of a button into his NC program since drill information and geometry may not always be correctly matched up, which means that manual inspections are required. "What we would also like is to be able to align and selectively modify drill lists, but this has not yet been put in place," says Dr. Göttker.

Missler Software has, in the meantime, implemented another of KBA’s requests for improvement: the long list of machining operations for a side frame can be subdivided in the machining manager and grouped differently. This facilitates subsequent updating and optimisation of the NC programs, for example, if the person operating the machine changes a particular drill setting and communicates this change to the colleagues in CAM programming. Previously, the programmers would then have had to go through the entire program meticulously in order to locate every point at which the changed setting occurs.

At KBA they are very satisfied with how NCDATA AG has been running the project. The original planning foresaw the transfer of the various machine groups in four phases by the end of 2009 to programming with TopSolid’Cam. "We now have all post-processors in-house, even if they have not yet all been tested and productively deployed," explains Klaus Rüger, Head of NC Programming & Production equipment design at KBA. "The other sites have some catching up to do, but this is primarily down to fluctuations in workload and employee numbers. Nevertheless, all the users are trained and are already used to programming on a daily basis with the new CAM system."

In Würzburg alone, NCDATA AG has retrained 20 employees over the last three years, including two machine operators who provide relief support with the programming at times of peak capacity. Two power users who were trained up right at the outset now take care of method programming, training and support: "We've discovered that users first of all need to get used to the system before they can be given any further training on it. We carry out the design training internally as a form of on-the-job training, because this allows us to respond more effectively to the individual questions and problems of users," says Mr. Wiesner, one of the two power users.

Depending on the receptivity of the employee and the level of complexity of the machine that is to be programmed, it may take up to three or four months before the user has perfect mastery of the new CAM system, as Mr. Wiesner goes on to explain: "The functional scope of the software is so comprehensive that anyone who is not continually working with the system has to re-familiarise themselves with it if they haven't been using it for several months. This doesn't exactly make it easy for our relief operatives, who are only assigned to programming in the event of capacity bottlenecks. Fortunately, the familiarisation process is fairly rapid thanks to the ease of operation, in particular when you are already familiar with the machines and the parts to be programmed."

From the user's point of view, the key strength of the new CAM system is the graphic/visual programming support. You see not only your component and/or the raw parts geometry but the entire machine environment, including the jig and tools, as well as 3D models. Following each machining step, you can update the raw part model in order to check where and how much material remains. "Carrying out machining on the volume model is of particular benefit when we have to program external parts that are manufactured by us on contract manufacturing," says Mr. Rüger. "The new CAM system has therefore been very well received. I am sure that none of our employees would be keen to go back to the old solution."

"The form of complex parts can be established so much more quickly, and you feel more secure in the machining because you can see each individual machining step," explains Mr. Wiesner, who goes on to say: "Our confidence in the programs that we generate using TopSolid’Cam still needs to be consolidated, of course. The longer we work with the system, the more secure we will feel."

The utility of the new CAM solution is now making an impression at KBA, even if this cannot yet be precisely quantified. "We already save so much time simply on account of not having to generate the geometry afresh in order to be able to program the part," says Mr. Rüger. "On complex parts, programming is also quicker thanks to the automatisms and methods. Unfortunately, we are still losing time on changes because we have not yet discovered the optimum way of working."

Thanks to the professional support from NCDATA AG, KBA has successfully negotiated the CAM programming system change more or less on schedule, and today works productively on all sites with the new CAM system. Dr. Andreas Göttker is confident that the productivity of users will continue to grow once their system know-how is established and the change processes become increasingly automated and/or more effectively supported by the software.