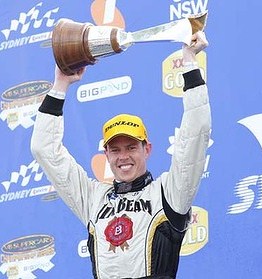 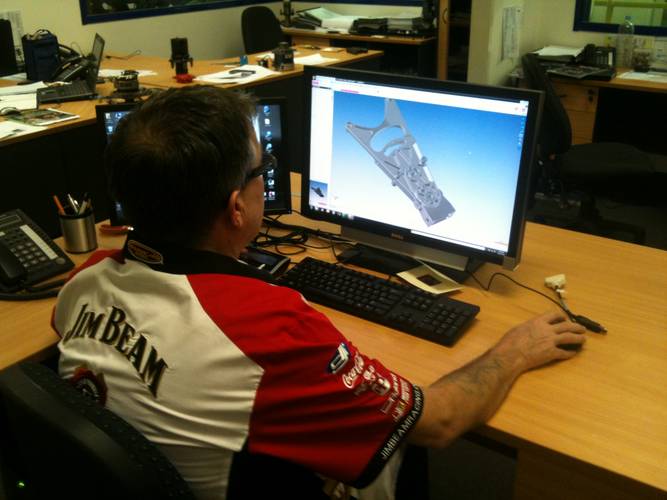 What a lot of people aren’t aware of is that the tool-of-choice for the development of the Ford Falcons of Courtney is the CAD/CAM/CAE/PDM/ERP software solution, TopSolid.

DJR originally introduced TopSolid to its Queensland-based manufacturing centre because of the strong reputation of the solution in the area of computer aided manufacturing (CAM). From there it became the preferred 3D CAD/CAM package for the engineering design department, and since then it has also become a diagnostic tool to study car behaviour on the track. TopSolid seamlessly links every part of the design-to-manufacture process together.

The first crew member at DJR to embrace TopSolid was machinist Jorg Rechlin:

We didn’t want to have to have separate programs for 3D files then complex machining and basic machining. We could have ended up with three different types of software. We had heard that TopSolid was very strong in CAM. When we saw that it offered a partnership of CAD and CAM we introduced it. I wanted everything in the one box.”

Collision control thanks to TopSolid's simulation

“The other thing was that I had heard stories of collisions on Haas machines when doing complex machinery. I couldn’t afford to have that happen. TopSolid has machine templates for simulation and I knew this would give me peace of mind that each job would be trouble-free. I couldn’t go past that fact.”

Jorg says everything is done in-house. They even make their own fixtures and jigs for complex parts. He adds that the flexibility of TopSolid sets it apart,

“TopSolid has been able to do everything we have asked of it from simple drilling and tapping to complex 5-axis cylinder head porting and 3D milling. The CAD/CAM has the versatility to edit and modify imported files with ease, to create fixtures in the CAM file without going back to designing it first, then importing to apply tool paths. There is also the flexibility to modify the fixture on the fly and then just regenerate the tool paths with one click of the mouse.”

DJR has little time between race meetings for car development and this puts added pressure on the machine shop which relies on being able to do lights-out machining to meet tight deadlines.

“On occasions we machine components before the entire projects are completely designed. The benefit of having TopSolid'Cam means updates in the native CAD file can be updated into the CAM file with minimum effort to create another G-code program.”

“I have complete peace of mind knowing that the G-code is going to do what you have set it out to achieve. Machine speed is no good if you need to cut it twice so our priority is based on ‘Do it once, do it well’. You can’t make parts with a broken CNC. I have confidence in porting cylinder heads without the worry of the machine self-destructing or the loss of expensive castings.”

Other time savers include less waiting around for G-code to arrive,

“Machine idle time is less as a new port can be machined by simply substituting the 3D model with the new one and a few minor changes and ‘Hey presto!’ I get improved productivity for the CNC lathe with live tooling as TopSolid has taken away the laborious task of creating separate tool paths along with the risk of typo’s and wrong code when you’re rushing and have the least amount of time.”

JoJorg adds, “The CAM side is not for everyone. Some people just want simple no-brainer software which is okay if you only do simple jobs with simple equipment. Fundamentally, if you want more control and job satisfaction then this is it. This software will help you get the most out of your machine.”

DJR design engineer Mark Woolfrey started trying his hand at TopSolid because he saw the gains being realised by the machine shop. He didn’t want to have to convert files for CAM. He has gone on to model up most of the Falcon’s thousands of parts and says TopSolid has helped them with areas as diverse as fuel economy and quicker pit stops,

“With ethanol fuel the new issue is economy. This has required us re-designing the intake bell mouth shapes of the inlet ports. It is highly complex engineering. TopSolid is good for designing complex shapes. There are a lot of parts that we make for the car which go unnoticed but each one of them is vital - it only takes one small part to fail and you’re out of the points. No matter how complex the part I know we won’t have any dramas with manufacturing.”

Mark adds, “We have a never-ending quest for more speed and for getting back out on to the track as quickly as possible. We re-designed the fuel cells and the location of the fuel filler to cut down refueling time. We only have to save one second in a pit stop for the difference between winning and coming second. That is how close this type of motor racing is.”

Mark has taken TopSolid to a new level by making use of the 3D CAD files for vehicle diagnostics. He is now able to see the behavior of the car and its components on any race track in Australia,

“I use the finite element analysis and kinematics functions for studying chassis geometry and for suspension development. Using data from the car’s data logger I can replay scenarios of our cars on various race tracks in a variety of race conditions. I can see camber changes, roll bar changes and roll centre positions on my CAD file. If we’re not getting the right results from the car we can freeze the data and see which parts are influencing its behaviour. It is true-to-life of what is happening at any time of a race.”

“TopSolid enables me to design a suspension part and know there is no clash at full travel.”

From being self-taught to booking in for formal training from CIM Solutions, Mark has discovered a lot of features of the software package. He says the more he “plays” with it the more he learns. And he finds it user-friendly,

“TopSolid7 is a completely different interface from 6. All of the icons are visible, and they’re easily available under drop down headings.”

Jorg is a fan of TopSolid’s Australasian distributor, CIM Solutions,

“The support that we get is very good. This is another reason for my choice in this software.”

“Working as a machinist at DJR means being fully committed to meeting the non-negotiable deadlines of each race - rain, hail or shine - and TopSolid has made that possible.”

CIM Solutions’ Steve Thomas says although TopSolid doesn’t have the prominence of other CAD/CAM/CAE solutions - having been introduced to Australia in the last decade - it has proved itself yet again as a world class product,

“TopSolid is now at the top of motor sport in Australia and is making a similar name for itself across engineering, manufacturing, mining, power, and other industries. It might not yet be a household name, but it is proving that it is the best.”