Complete in-house production of tubular turbines. Renewable energies are an important resource for dealing with the world we live in in a lasting, environmentally friendly manner. Bunorm AG has supplied special turbines for small power plants using smaller amounts of water for power generation. They were manufactured and assembled completely in-house. 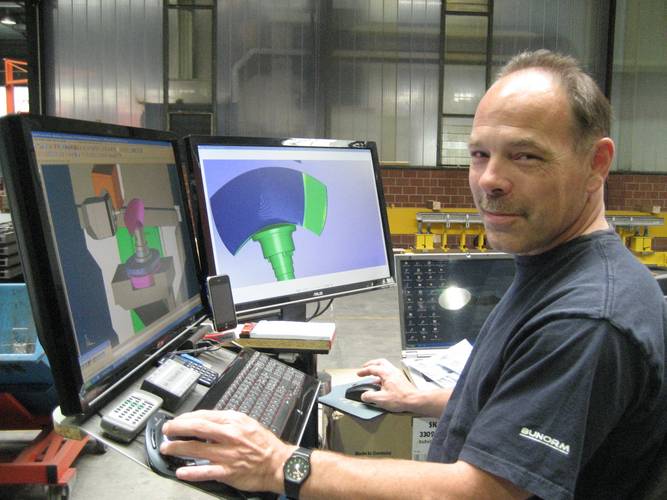 Hydroelectric power still covers more than half the electricity required in Switzerland. Now the expansion of reservoirs and river power stations will soon reach its limits. However, small power plants still have development potential. It's worth it to use even smaller amounts of water for power generation. Bunorm AG, with headquarters in the Swiss town of Aarwangen, has supplied three small turbines for this kind of power plant. They were manufactured and assembled completely in-house.

Bunorm employs a staff of more than 60, was founded in 1965 and originally produced items for civil defense and fire brigades. This was then followed by the transition to a mechanical engineering company specialized in welding techniques and the machining of large parts. The company is managed in the second generation by Urs Morgenthaler. He says, "Our strength is the machining of work pieces up to 12 meters in length on our machining centers. Our own engineering department enables us to take on orders that other suppliers arc unable to fill". For example, Bunorm offers self-developed working platforms for tunnel construction, which are used by German and Norwegian road construction companies. As a wage producer, Bunorm supplies Swiss machine builders and automation companies. It is in this context that the company received the order mentioned at the beginning.

From individual parts to delivery of complete tubular turbines

Initially, Bunorm only supplied individual parts. When these met up to its customers' expectations and the supplier was unable to deliver the cast Kaplan blades on schedule, Bunorm received the order to mill these from solid material. The order was then expanded and also comprised the delivery and installation of the entire tubular turbines, the constructive production of which also entailed certain engineering tasks.

Digital models in the 3D step formal were available for parts production on CNC machines and prior programming. The most demanding work piece for turbines is the blade, which must be milled with 3 to 5 axes. For their programming, Roger Knobel, machine operator and CNC programmer, used the TopSolid'Cam CAM system from Missler Software. This system is sold in Switzerland by NCData AG in Zurich and in Germany by NCData GmbH in Öpfingen. NCData supplies the software, produces the postprocessors and trains the users.

The case described concerned a supplement to the original basic training program in order to select the correct milling strategies. NCData conducted local training in 5-axis milling with TopSolid'Cam. Together with the programmer Knobel, suitable machining methods were developed and checked using a model. The prototype of an aluminum blade was milled beforehand to study the feasibility. To mill a blade from solid material, most material must be removed with 3-axis roughing cycles. Due to the limited working area of the DMU 100T 5-axis milling machines from DMG, 3-axis roughing had to be carried out from ten different directions. Here the TopSolid'Cam programming system helped to define working levels and roughing cycles and to check the material removal carried out. Programming and checking were carried out exclusively on a computer. For example, the dyed areas in the picture (see right) show the operator very precisely where it is necessary to cut away material and where material is still present for additional milling operations.

As a final step, the entire blade was finish-smoothed with the 5-axis sweep method to refine the surface and reduce the required polishing effort. Here as well, it was necessary to proceed step by step with different inclinations of the milling cutter relative to the material due to the limited machine room.

The safety of milling collision-free

During all work steps the realistic machine simulation from TopSolid'Cam offered the safety necessary for milling the part collision-free. Knobel was able to depend on the calculated collision check using all machine and chucking elements. "Without the extensive simulations and test functions of Top Solid' Cam, it would not have been possible for us to program and mill this blade," he explains. "With the CAM function, which enables the exact behavior of the machine when changing levels to be defined, saved and reused, it was also possible to program the approach distance in accordance with reality, and therefore to avoid all collisions in advance".

All other work pieces of the turbine were programmed with TopSolid'Cam and milled or lathed on machining centers from Bunorm. Finally, the turbine was assembled and delivered for installation in the power plant in the process, it became apparent that the pipe in which the rotor was to be inserted, has been incorrectly designed by the customer and had to be remachined to the right size by Bunorm. This meant dismantling and return to the factory. One more argument in favor of a complete supply from Aarwangen.

Bunorm uses TopSolid'Cam since 2006 to program its CNC machines. Initially, relatively simple supplied parts were produced, which could be machined with 5 positioning axes. One year after these initial steps, the first application for 5-axis simultaneous milling followed. NCData produced post-processors for all machines and adapted them to the special needs of Bunorm. Since 2009 tubular turbines have been manufactured completely in-house. In response to the question of whether the software has opened up new business segments, Morgenthaler clearly replied. “Yes". The company's strategy is the supply of assembled modules and complete machines. These provide greater added value, and with its own Engineering department, Bunorm has created excellent conditions for supplying more than just the machined work pieces. Morgenthaler explains, “Each machine contains its own very complex parts. As we always program with TopSolid'Cam and produce here at the factory, we can supply everything from a single source and receive an increasing number of orders."

Bunorm trains two polytechnics a year and also provides training in high-end CNC programming. A simple 2- and a 5 axis CNC machine are available to trainees for this purpose. Public vocational schools and instruction at the professional association cannot offer this demanding training. Therefore, in future Morgenthaler wants to have all trainees trained at the trainee boot camps offered by NCData.