The Aleit company was founded in 1961 in Steffenburg by the father of the current proprietor, Holger Aleit, and has a headcount of 31 employees. It is specialized in the design and manufacturing of precision tools and tool systems used in machining, and sees itself as a service provider that offers its customers complete solutions from consulting and analysis through development and design of tools to CAM programming and manufacturing, all in accordance with strict ISO quality standards. Its clients include large international corporations, as well as many smaller distributors of cutting tools and inserts. 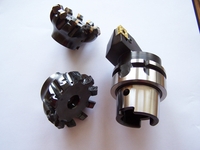 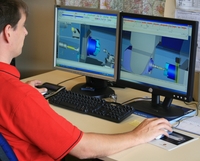 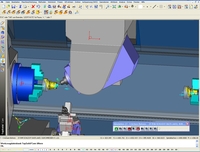 The right tool for end-to-end machining

As well as a range of standard tools, Aleit produces in particular special tools that are developed and produced under contract either for tool manufacturers or for corporate industrial clients. The quality, productivity and precision requirements for these tools increase with each succeeding machine generation, and oblige the company to constantly develop new technologies for ever faster and more efficient machining. Some of these have even been patented. An example of this is a milling head with PCD indexable inserts, which when assembled have runout and circularity precision to within 5 µm.

"Our greatest strengths are the innovative ideas of our employees and the flexibility we have as a small firm," says Holger Aleit. "Our competitors are practically all large corporations. There is hardly any other company of our size that has the personnel, machinery and measurement technology capable of tackling the challenge of producing these complex and precise tools. We are, if you will, a high-tech forge with highly qualified employees who are also capable of operating these complex machines and software systems."

For the end-to-end machining of ever more complex and precise components, the company has procured two mill-turn centres from DMG, equipped with nine axes and 80 tool slots each. The company also uses in production several five-axis milling centres, a four-axis DMC-type mill, a two-spindle MF Twin turning centre (all from DMG) along with a five-axis machining centre from STAMA. The machining pool is rounded off with a brand-new grinding centre from Studer. The company also recently set up a climate and vibration-protected coordinates measurement room, for which accreditation is being sought as a DKD (Deutscher Kalibrierdienst - German Calibration Service) laboratory. To this end, the company is ideally equipped for integrating the Coromant Capto tool holding system according to DIN standards. Aleit is one of the first companies worldwide to manufacture tools and systems using this tool holding system, which requires the machining of complicated, conical orbiform curve polygon geometries and respect for contour precision to within 4µm. "If you announce precision to less than 1000th of a millimetre, you also have to be able to demonstrate it," says Holger Aleit.

The procurement of these multitasking machines was one of the main reasons why Aleit introduced the TopSolid software in early 2006. "For our low unit volumes, reducing the setup and running-in times is of utmost importance, particularly when you have such expensive machines," Mr. Aleit stresses. "Exploiting machine performance to the maximum and synchronising so many axes is a massive challenge for the programmers. Here, software such as TopSolid comes into its own, as you can use it to examine the possible collisions on the computer and also visualise how the machining is to be distributed on the revolver heads and spindles."

In order to make the increasing complexity of tools more manageable, the Aleit Company has been using since 1999 a 3D design system in conjunction with GOelan CAM software, also from Missler Software. However, this solution was neither multitasking-capable, nor could it be used for simulating machining in a virtual machine environment. "We were very satisfied with GOelan where the milling machining was concerned, but we did not want to deploy several systems for programming and this is why we decided to switch to TopSolid," says production manager, Volker Michel. Currently, TopSolid is running in all on three PC workstations, two of which can be used both for design and for CAM programming, while the third is used essentially for training purposes.

The powerful CAD functions of TopSolid and its thorough versatility through CAD and CAM make it perfectly suited to the users' requirements. Often, these users do not receive ready-designed tools from their clients, but only drawings or the geometry of the inserts, around which they need to construct the support tool. "For smaller clients, in particular, we do a relatively large amount of design work, but our bigger customers also occasionally leave the design to us," says Michael Weber, who works at Aleit as a designer and programmer. "In these cases, we model the tools in TopSolid and program the machining on the basis of these geometries, so that we can apply any geometric modifications directly to the CAM programs."

TopSolid has particularly won over its users on account of its reliable simulation functions with automatic stock tracking, the implementation of which cannot of course be judged in advance in the postprocessor, as Mr. Weber explains: "The best CAM software is only as good as the people who write the postprocessor. We could however be fairly certain that AdeQuate Solutions would manage this, because their people had already developed the postprocessors for GOelan." The Missler Software distribution partner from Lahr did not only supply the postprocessors but also supported Aleit with the processing and representation of their machine model, with the basic data being partly supplied by the machine manufacturer and partly modelled in TopSolid.

Although the adaptation of most of the postprocessors was accomplished pretty quickly, there were a few teething problems with the DMG mill-turn centre. This was partly down to the complexity of the machine and its special programming structure, but also related to the lack of experience of the machine users in using the CNC programs generated by the postprocessors. Since then, the postprocessors have been running stably and only a few minor adjustments need to be made on an occasional basis.

The tools are modelled and administered using TopSolid’Tool, for which AdeQuate Solutions has programmed an add-on module that simplifies data entry of cutting data for users.

Changeover process for the users

Over five days the users were trained in the use of TopSolid by AdeQuate Solutions. It took a good half-year for them to become as productive with the new tool as they were with the old solution. The system change meant a radical rethink for them, as they had to get used to a whole new way of working, as Mr. Weber explains: "Previously, I could program simple parts in just a few minutes. Now it takes me somewhat longer, since I first of all have to generate my raw part and my clamping jig before being able to program machining on the virtual machine. The tools and the tool holders have to be just right for me to be able to really see whether or not there is any risk of collision. Yet this means that if I've run through the simulation and the tools set up on the machine correspond to those in TopSolid, I can be 99% certain that my CAM program is not going to cause a crash."

The more complex parts become, the more time you save with TopSolid on programming, one reason for which is that the software is more intuitive to use and less time is spent on checking the individual processing steps. The user can already see in the machining preview the tool paths and any possible collisions. At the same time, the programming outlay is reduced on account of the fact that it is possible to define reusable processing cycles for drill holes, recesses and similar geometric elements. "Unfortunately, this does not work with our insert sockets, because they are too geometrically complex and multifaceted," production manager Michel laments.

One of the strengths of TopSolid in the programming of multitasking machines is the synchronisation of the machining operations, designed to avoid collisions and distribute machine workload evenly. Since the software knows the cutting values for all tools, it can precisely calculate the machining times for the individual operations. The results are presented summarily in a graphic bar chart, to facilitate user optimisation of the machine running times. "When I see that my revolver head has been working for one minute on the main spindle, I may try to organise two shorter operations with the milling head on the opposed spindle," Mr. Weber says.

Aside from the odd desire for improvement, the users are very satisfied with TopSolid. The use of the Missler Software solution has not only accelerated the programming, but has also contributed significantly towards reducing the setup and running-in times. It is however difficult to quantify these savings since the tools have become more complex and the current machine pool can no longer be compared with how it was five or six years ago. "We have diverted the time saved from manufacturing into the technical office, since a computer costs less to run than a machine," Mr. Michel goes on to say. "For many tools the programming can take almost 3 days, but the payoff is that we can set them up completely in a single day. This used to take longer."

The extent of the reduced running-in times depends of course on the machine and the user. If a machining centre needs only 1.8 seconds for a chip-to-chip tool change, the operator is unable to react so quickly. Younger employees, who have grown up with this machine generation, therefore tend to rely more on their colleagues in programming than do the "old hands" in manufacturing, who pay attention to every detail during running-in. " We therefore have to be all the more scrupulous when checking our CAM programs,” says Mr. Michel, who is proud of the fact that only very few collision problems have occurred since the introduction of TopSolid. The company is optimistic about being able to use the software to machine not only KM and HSK but also, in the future, complex Coromant Capto tool systems in line with the appropriate quality requirements.