Who has never dreamed of just hitting a key on the keyboard and seeing their NC program run itself automatically? This apparently crazy idea is now a reality, proving at least 2 things: The first is that a lot becomes possible when you knock on the right door. The second is that you should always believe in your ideas and see them through to the end. Read about this real-life story below… 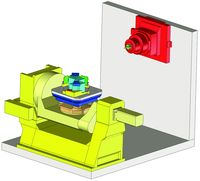 The engine nacelle is jam-packed with aeronautical technology and on its own reflects all the issues facing modern aviation. It is a crystallisation of the know-how and expertise essential for both the aircraft and the environment. Within the Safran group, Aircelle designs and builds the nacelles of tomorrow. In addition to thrust reversers, which constitute its core business, Aircelle designs and integrates all nacelle components, from business jets up to the Airbus A380. This integration firm is heir to an industrial history that began more than 110 years ago, boasting valuable technological expertise that culminated in the thrust reverser at the beginning of the 1980s. With a workforce of 3,500, Aircelle permanently optimises its products by innovating in the aeronautical, acoustics, composite materials and safety fields, thereby stimulating its three-fold technology/cost/maintenance performance.

Taking nothing for granted

Benoît Barbé is head of the CAM unit at Aircelle. This methods-programming department located near Le Havre employs 5 people, who draw up all the machining programs for all the company's centres. The parts are machined using 6-axis turning and milling, in lengths ranging from 100 mm to 3,500 mm. Two years ago, Benoît Barbé was entrusted with the CAD-CAM project within the CAX department. His goal was to harmonise the CAM software inventory used throughout the various sites. The target was a single level of expertise, leading to perfectly trained staff all using the same product. The approach to be followed was to identify the capable software, determine the tests to be run and have them carried out by the various players. The specifications drawn up involved specific development and total compatibility with the Catia CAD software already installed. One software developer whose structure was felt to be fragile and software considered to be average was rapidly eliminated after the first demonstration. One of the two remaining on the short-list did not want to make the investment necessary for specific development, thereby leaving the field wide open for Missler Software. With its TopSolid’Cam software, it successfully passed the tests and, from the outset, demonstrated its ability to guarantee satisfactory development of the longed–for module. Proving to its well-established counterparts that nothing should be taken for granted, Missler Software won the contract …

The reasons behind the choice

Missler software was unknown or at least very little known to Aircelle just a few years ago but it rapidly convinced the firm with the powerful functionalities of TopSolid’Cam and by the customer relations, responsiveness and professionalism of its commercial and technical teams. Benoît Barbé stated: "TopSolid’Cam fully meets our needs; it was written by like-minded professionals who speak the same language we do. Moreover, Missler Software's flexible structure means that it was highly reactive, a fact that was much appreciated". Of the software's remarkable functionalities, Benoît Barbé considers that pride of place goes to the topological analysis which manages modifications to CAD models from software other than TopSolid, because in this case, change management is implicit. TopSolid’Cam in fact proposes a topological analysis between the initial model and the modified model in order to identify any differences. This analysis uses the "Compare and Replace" function. Its aim is to identify the machining processes impacted by the geometry modification and to propose new machining processes. In other words, this function shows only the additional work that needs to be done following the modification. In this way, the operator does not need to completely repeat the machining process. This is a major advantage of TopSolid’Cam which operates with all CAD software, as it is the topological analysis that informs the programmer of all the changes to the part. The 2nd advantage mentioned is the gateway between TopSolid’Cam and the NC Simul simulation software from Spring technologies. The word frequently used is "magical" and it is activated with a simple click. Finally, in third position comes the interface with Catia, considered to be highly efficient and extremely reliable.

When industry finds itself faced with a new product, the initial reaction of the users is to compare it with what it is supposed to be replacing. As regards TopSolid’Cam, the well-known Windows environment made for quick and easy integration. Training brought to light elements of the kernel that were clearly designed for the users, unlike some products which are designed purely as computers. Thanks to the 5 licences acquired, all the programmers at Le Havre now use TopSolid’Cam 2008, with all of its standard modules and gateways. "It's hard to talk of productivity gains, as the processes validated by the laboratory are unchanged. What we have seen however, are programming times reduced by 10% for both milling and turning, says Benoît Barbé. He added: "Since we acquired TopSolid’Cam from Missler Software, we now require all our subcontractors to use it. As the programs are the property of Aircelle, we will recover them all in order to process them in-house". We should point out that Missler Software is well-established in the aeronautical sector, with prestigious references such as Airbus Cimpa, Bodet aéro, Exameca, Safran group – Microturbo, Turboméca, Sagem communication, Snecma – Mécachrome and Mbda. Nothing but the best …

At the time of going to press, the confidential specific development has been delivered, proving Missler Software's considerable expertise in this field. Better than a lengthy speech are the bare facts: the complete programming cycle has been reduced from 5 weeks to less than 2 days, including simulation. It should also be noted that the programming itself only takes half a day, with the rest being taken up by concurrent computation. Benoît Barbé is of course unable to hide his satisfaction and concludes with the following words: "Before investing, you must always take a hard look at what you have, hunt out information and seek advice". Advice that the profession as a whole could do well to follow!